So much about this piece is still a mystery that has our imagination juices flowing but let’s go over what we do know. 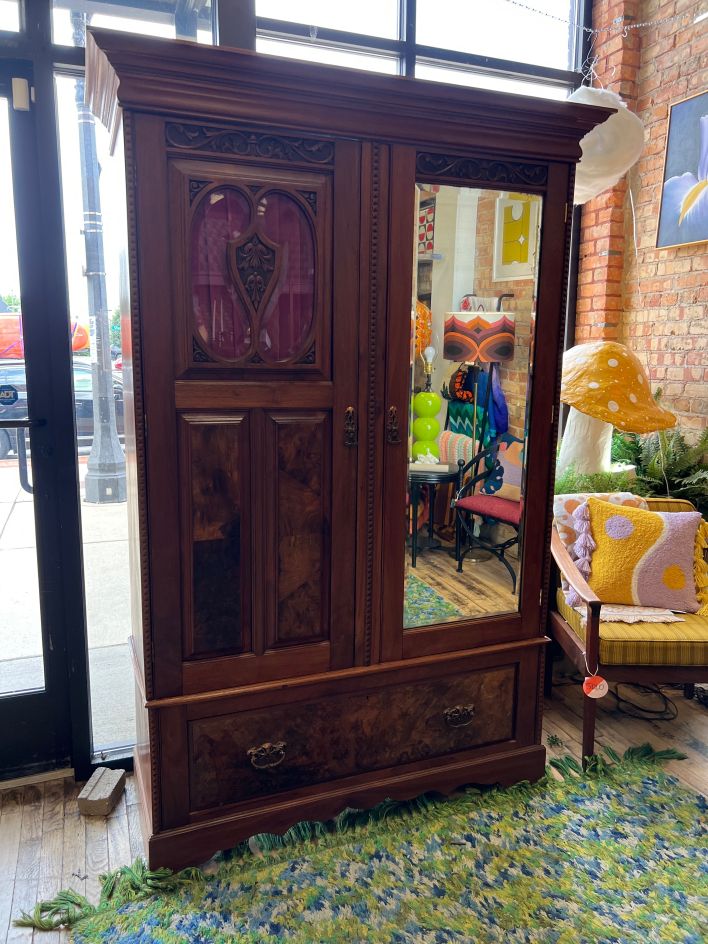 Ok so firstly let’s talk about the beauty. I don’t how this survived over 150 years, traveled so far and barely even has a scratch! The energy of this piece is magnetic. It is happy and draws you into her details. It features hand carved insets, completely solid walnut with all the right details without being over the top and gaudy. The wood is incredible. Old growth Walnut Crafted so well and finished smoothly. Can’t even imagine what the wood cost alone would be to make it today 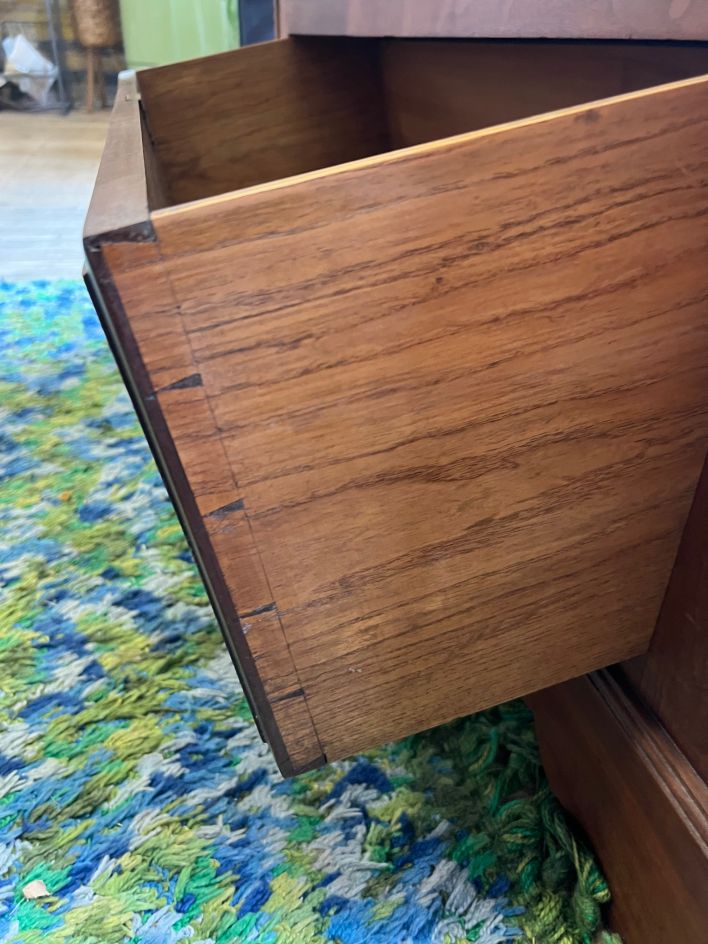 It is comes apart in three pieces for easier moving. One big deep drawer and two separate hanging spaces. And then to top it off gorgeous burl wood veneer on the panels and the door. This piece is surprisingly not too heavy for the size. I love taking in every detail, the beveled glass, the velvet fabric, the age on the mirror, I mean it even barely had dust on it!. *chef’s kiss* 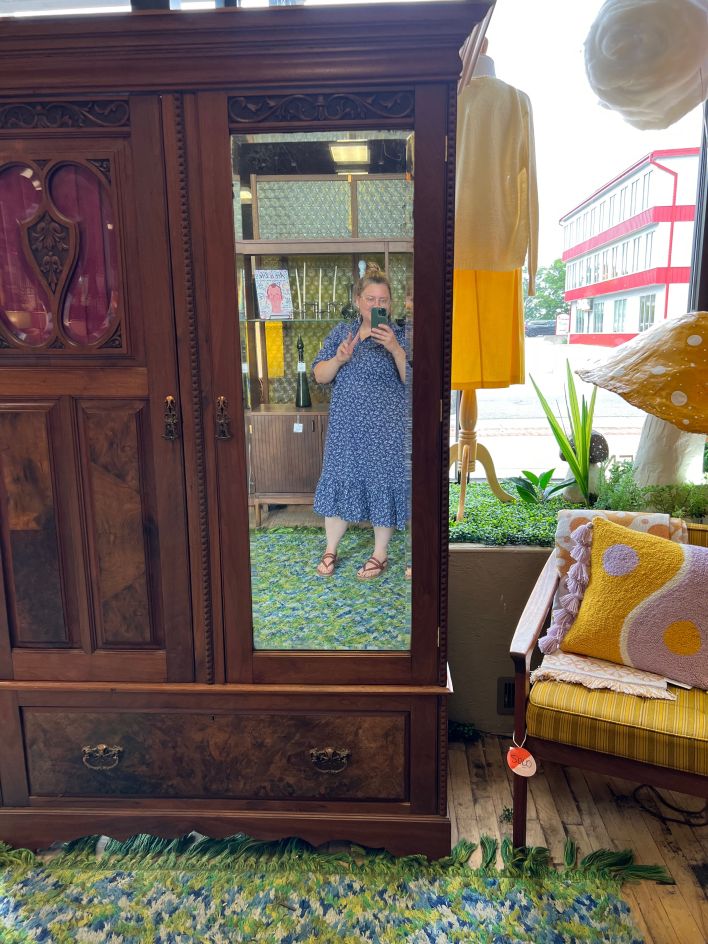 Ok we can go on and on about all the  dreamy details but now here is the history we have uncovered so far! So one of the first things I noticed was the hand written shipping tag on the back of the cabinet. I could tell by the style and writing it was over 100 years old. saw “Liverpool” and my heart skipped a beat. 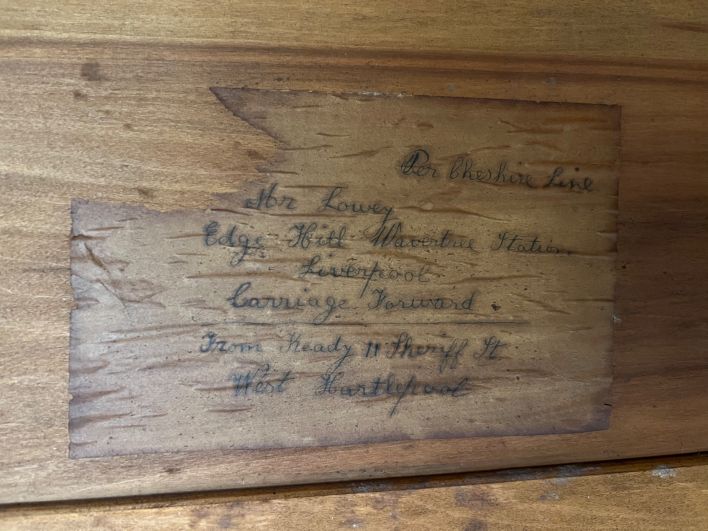 I acquired this piece from a person cleaning out an estate. He had a big job nearly finished and offered to part out some of the finds because he was out of space and time. A mutual friend thought of me and I am forever grateful he did because I get to be the guardian until this piece is in the perfect home. Anywho!! I really wasn’t sure how to read this label, it seemed to be backwards with the to and from. I thought it said Sheriff LT. Like Lieutenant? Like a Sheriff’s wife? So I google West Hartlepool Sheriff Keady with no leads. But then I came upon a Sheriff st when reading the history of the town. So it was an address! 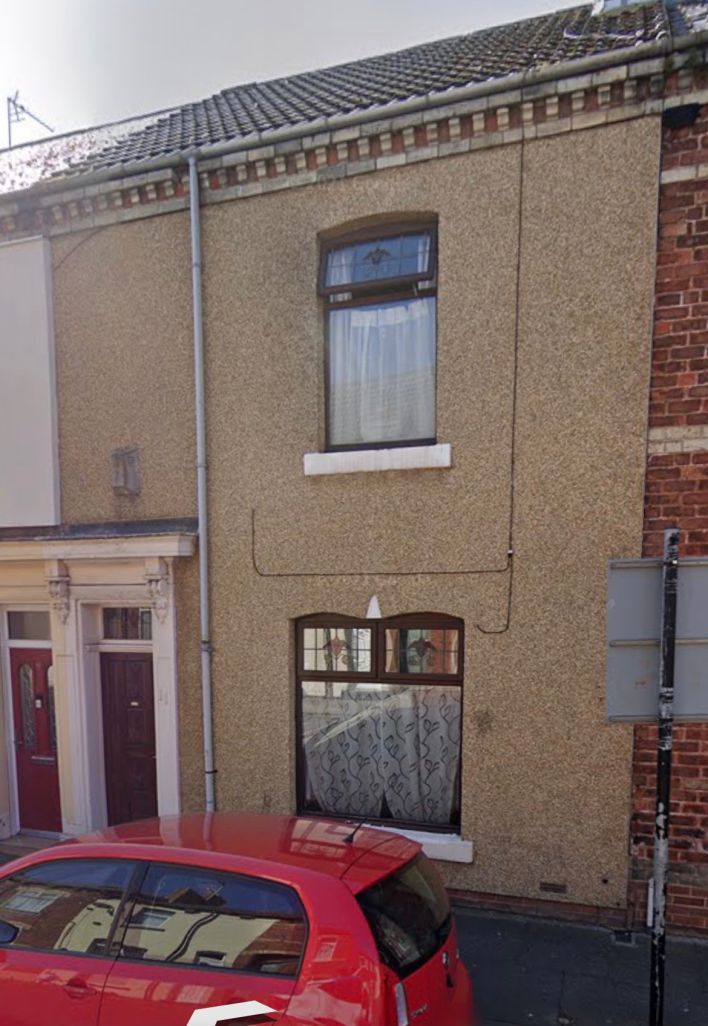 (Picture shown of 11 Sheriff st present day) I needed to call in Reinforcement, so I recruited the help of the best historian I know, Emily from Jean Jean Vintage! She uncovered a few censuses from 1881 and other details regarding the Keady family.

Elizabeth (Armstrong) Keady sent this wardrobe from West Hartlepool to Mr Lowey in Liverpool, but why?! Their only daughter wasn’t getting married to any Lowey. No relatives I could find with that name (although there is limited history on Elizabeth, not even her death is recorded) her Husband John was a Forgeman which was lower middle class in that time so maybe they needed money? Another clue in the label is the words “carriage forward” which at that time meant the buyer was paying the shipping upon arrival. This must have been some piece for it to be bought 164 miles away and travel across the country. The only mark I can find on the piece is “Lever” stamped on the hardware. Which is a common last name , could be the cabinet maker?. 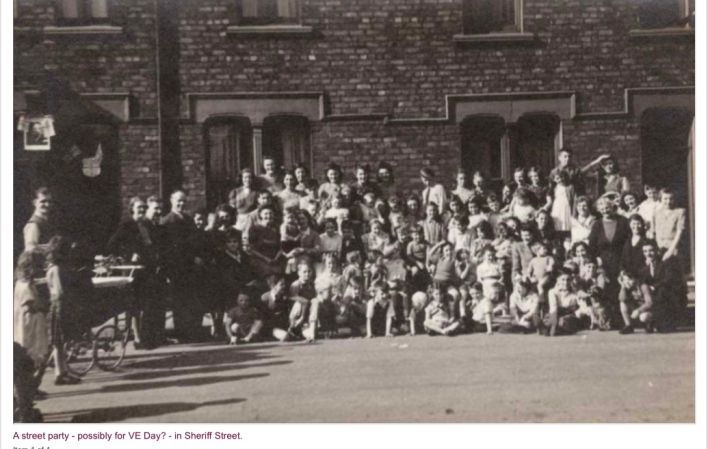 In all this digging and researching I learned so much about the town of West Hartlepool and what the daily life might have looked like from mid 1800s-1900. One fact, the population was booming and in 1881 It was 28,000 so about the size of Port Huron. The West Hartlepool town was formed in 1848 and later became just Hartlepool in 1960. (Fun fact! Janick Gers of Iron Maiden was born in West Hartlepool.) Cholera out breaks were bad and several claiming thousands of lives. One interesting fact is that Keady was an Irish name, there are reports of many families migrating from there but no real documentation of the name Keady on anything. There is however Lots of information about the name Armstrong. It was a well established name and many elite upper class families with the name Deeply rooted in the area. Was Elizabeth the daughter of an aristocrat who married a poor Irish iron worker? Maybe she was shunned and that why there isn’t much history reported about her? So many stories could be imagined. But how in the world does this piece travel across England and then some how end up in Rives Junction Michigan?! I am still gathering information and sent a few emails to historical sites that I will post updates. But I will say after all this I am blown away by the condition of the piece!

comparatively online these pieces range from 1500-5000. We priced ours conservatively at $1895