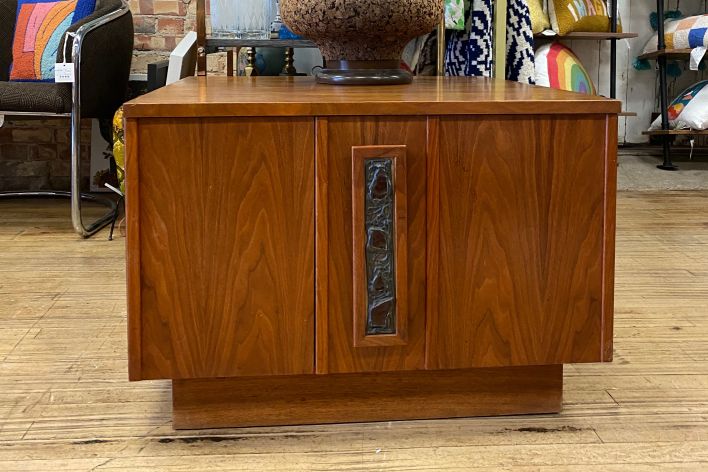 John Keal for Brown Saltman side table or bar. Beautiful walnut grain with Brutalist copper and glass abstract door hardware. Walnut grain is beautiful and original, this piece has not been refinished but in very good vintage condition. Versatile can be used as a bar, cabinet, or side table. Right compartment is open and can hold barware or other small items. This piece would have originally came with folding lap trays that fit into the larger open side. 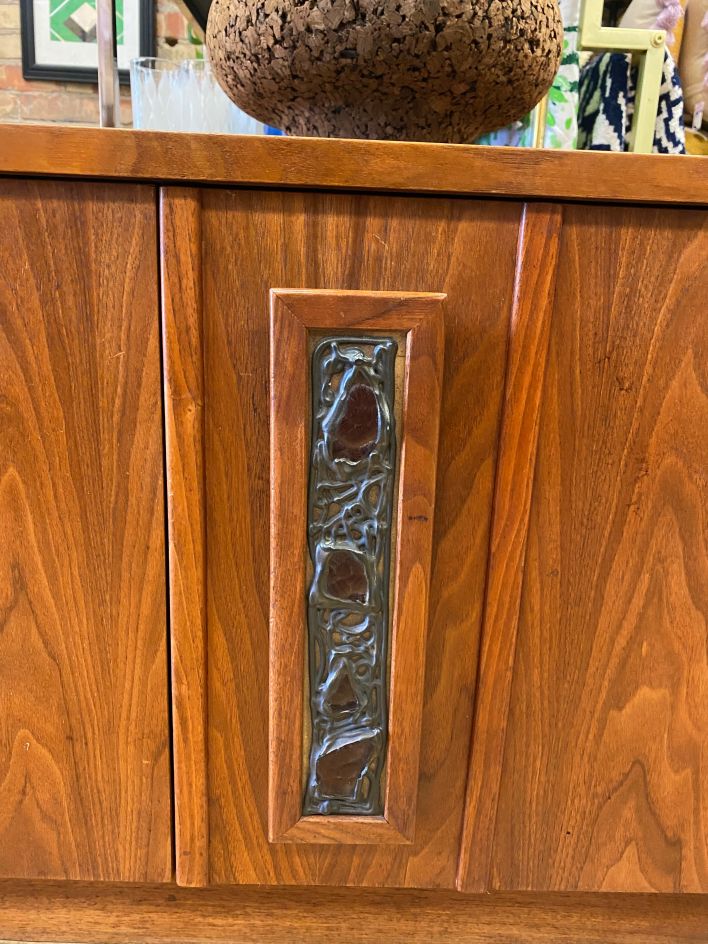 John Keal was a member of the gang of talented designers (Paul Frankl, Paul Lazlo, and Gilbert Rhode included) who worked for LA furniture manufacturer Brown-Saltman in the fifties. The company’s tagline: “Live in the Modern Mode.”

Brown-Saltman was a collaboration between Dave Saltman and Paul Frankl, a leader in American Art Deco design. Frankl created the “Skyscraper” furniture that was made to resemble the increasingly Art Deco skyline of New York City. Although Frankl had some valued big-Hollywood customers, by the 1930s he became interested in the opportunity to distribute his designs to the masses.

The Brown-Saltman partnership began in 1941 and was instantly successful. Certain more expensive features were eliminated in order to attain the lower price point. Most often, the pieces were constructed using soft woods or Weldtex, a combed wood, plywood laminate invented by Donald Deskey. With original Frankl designs now geared toward mass production, there was no slowing them down. There is surprisingly little information on the web about this trend-setting company.  Brown-Saltman was based in Los Angeles, California.  Over the years, the company’s name was associated with design legends such as John Keal, Paul Laszlo, Paul T. Frankl, Gilbert Rhode, Hendrik Van Keppel and Taylor Green.

Or so it seemed… In 1942, only the day after signing an extended contract with Frankl, Saltman died in a car accident. The original momentum diminished, and although Frankl continued with the business for a bit longer, it did not last. Although short-lived, the collaboration left behind some innovative and lasting designs. It’s products continue to fetch high prices in the collectors’ market.

Others like this sell for $1000+ we have a conservative asking price.